I wanted to break the walls of ignorance – Raif Badawi

I had no idea what to expect when I picked up this book.

The international effort to Free Raif Badawi has been on a scale I have never seen before. An individual persecuted for freedom of speech and a stranger to us all; yet we all feel like we know  him!

His wife, Ensaf Haider, has also been an inspiration to us. Never giving up and keeping up the continual pressure on the world to fight against this injustice. How she has managed this has been truly amazing.

I suppose I was expecting a serious monologue on the subjects he was interested in; what I found was a nuanced and effective delivery with a touch of humour and sarcasm. He reminded me of myself – if that is not too vain! A warm individual, full of passion for his subject, a passion that bounces off the pages of the 15 blog posts included in this book. A man wanting a secular governance with no priorities for religion. A Saudi Arabia that gives equal rights to all no matter what your religion or non-religion. Is it really too much to ask?

He pushes for equal human rights in a country that sees women at best as chattel.

The majority of free thinkers in Saudi have wanted to speak out about these issues. However, only when they had left this oppressive country, have they done so. For Raif though, it was important not to abandon his roots but rather to allow people to encourage freedom of thought, to give respect to others of all or no faith and to free women from the slavery in which they are held.

He pushes for a Saudi belonging to this century not one hanging onto the coat tails of a bygone age. With the world striding forth at pace, how long can Saudi hope to encase themselves in the mental slavery of their religion? If free thought is only available to people when they leave their country, what hopes for that country other than to be filled with old men and religious fanatics? They can only be sounding their own slow death knell.

It was a shock to see an introduction by Raif himself. I guess over the past few years I’ve not thought of the possibility that he may be aware of what was going on in the outside world. It was wonderful to see he has not lost his spirit! One particular paragraph touched me :-

In the prison lavatory, I took a look around me, only to find some filthy tissues and excrement everywhere. It was a staggering situation:  the walls were soiled; the doors were rusty and rotten. Here I was, trying to adapt to this new chaos. My eyes scanned the walls around me, reading the hundreds of sentences written on the sticky walls. My eyes caught an unexpected sentence: ‘Secularism is the Solution’.

I rubbed my eyes with both palms. For a second, I didn’t believe what I was seeing. This discovery could mean only one thing. There was at least one other person here who understood me, who understood the reason I was jailed and the goals I was hoping to accomplish

Imagine a Saudi with a freedom to speak out. Are we not all supposed to be critical thinkers rather than mind-numbed, indoctrinated fools? Raif is right, the world has progressed and you cannot stay stuck in the Middle Ages for ever…

The West’s silence on this miscarriage of justice is to be abhorred.  We have the capability to push and we do not. Instead, this week Obama kow-tows to the Saudi’s, reassuring them the deal with Iran will not threaten their power in the Middle East.

FREE THOUGHT IS NOT A PRIVILEGE BUT A NECESSITY

We are with you Raif and the noise will continue until you have your freedom to live outside those prison walls. 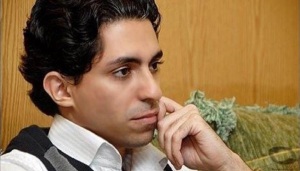 I will leave you with another quote from Raif Badawi :-

Some think I have something to say; others think I am an ordinary man with nothing to share, a man who doesn’t deserve his writings to be collected in books or translated for the world to share. However, when I look within, I only see that thin man who miraculously withstood fifty lashes, while a group of people celebrated his pain, repeatedly chanting “Allahu Akbar”.

All for the articles you’re about to read

The book is available in bookstores and online with Amazon.

1000 LASHES BECAUSE I SAY WHAT I THINK – RAIF BADAWI

Find out more about SON and the shows that make up the network at Secular Outreach.com

Just an athiest with opinions on things. I know that's rare right?

Shining the light of truth on delusion

German atheist writes about his thoughts on religion, Philosophy and science!

My Father's Story from his youngest daughter's heart and memory one paragraph at a time....(Read from the bottom up to read the full story)

Collecting my memories, writing with honesty, and discovering my inner voice.

Attempting a rational exploration of the issues of our time

Musings on a mad world

One Chance to See the World
SECULAR SCARLET

Theology Is Ignorance With Wings

A collection of epiphanies, a discovery of philosophy

Southern Feminism in the Kudzu

Make yourself at home

Out From Under the Umbrella

playing in the rain

Be warned, there is a virus of a person to know about!

The Secular Round Table

REASON, or Religiously Educated Atheists, Secularists, and Other Non-Theists, is a small coalition of atheist activists that seek to change and improve the world through knowledge, logic, and REASON.

The latest news on WordPress.com and the WordPress community.

Trying To Be Rational

Growing up atheist in the Bible belt

The Gospel According to Jon
Interesting Literature

A Library of Literary Interestingness

Where I ramble about a variety of topics!

The ramblings of a born again atheist

Why I No Longer Believe

My Journey Out of Christianity

I Love Me vol I

Short stories and poetry of all shapes, sizes and genres

Promoting rationality in an ever more irrational world.

Life After Doubt
Remedy of Fanaticism

Sapere Aude! Achieve The Courage To Use Your Own Reason!

all plans remain fluid until the moment of actuality

thoughts from my mind to yours

The Gad About Town

Distrust is not a mental illness

A Life's Worth of Observations from a Songwriter and Sound Engineer

A blog full of humorous and poignant observations.

One man's thoughts, observations and rants